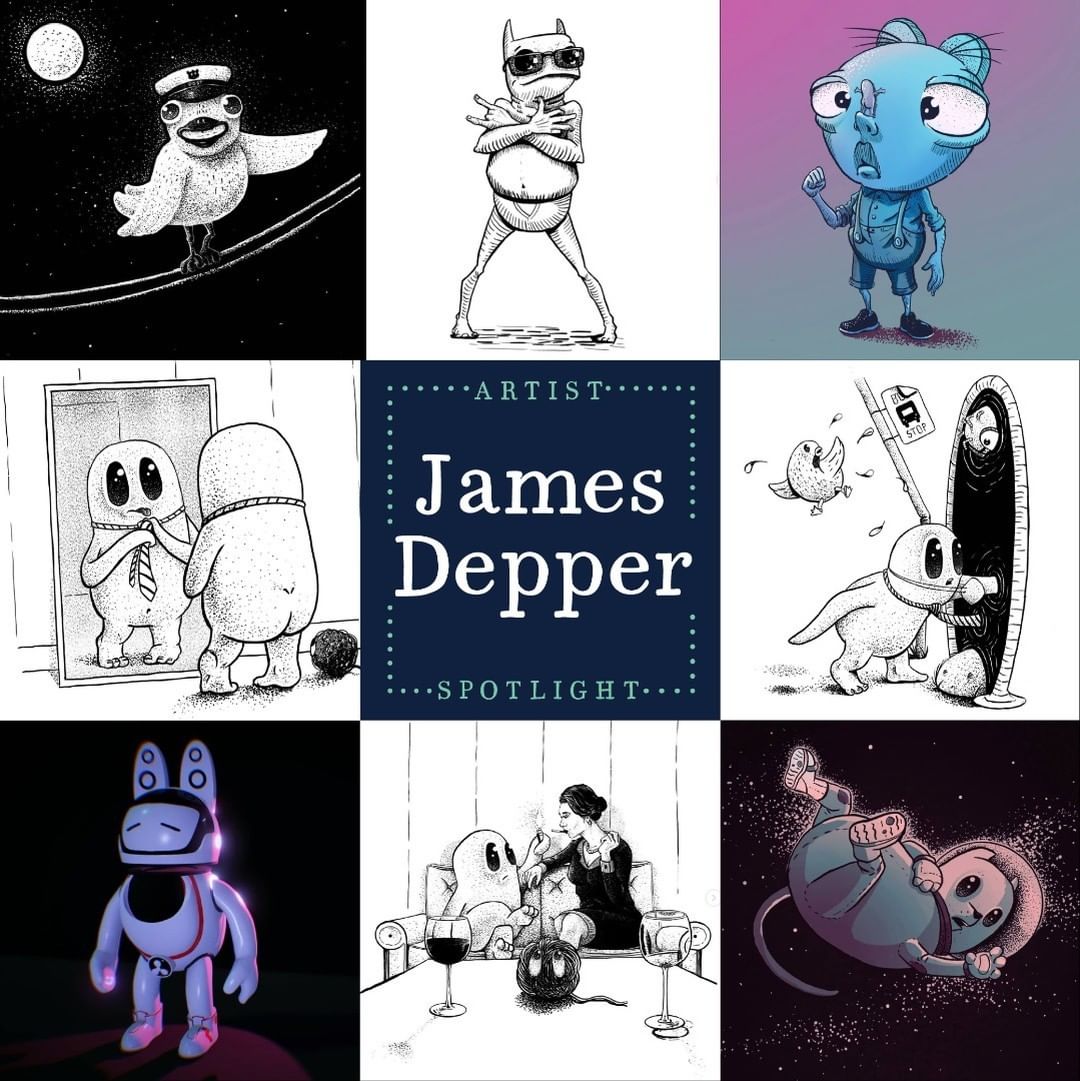 We have another incredible interview for you today! Thank you James Depper aka @thedepsdoodles for being our Artist spotlight of the week!

Please can you give us a brief little introduction about yourself?

Hello! My name is James & I doodle things. I graduated from Wolverhampton University (UK) with an illustration degree almost 100 years ago now, so I’m older than you would think. Straight out of university I was gainfully employed at a local supermarket while also trying to do some doodling at the same time, social media (other than Facebook) wasn’t really a thing back then so I had an actual website which no-one really knew existed, I was abjectly terrified of telephones and of most other people too. So I wasn’t good at promoting myself.

I entered Channel 4’s E-Stings competition (to make short channel idents) & placed in the top ten, which meant my little animation was on telly. It featured a frisbee decapitation & at the winners ceremony, nowadays celebrity Alan Carr called me sick when he announced the results, that was before sick meant cool, which was cool, I still dine out on that, if I dined out, which I haven’t for a good while.

I did a couple more things for C4 before falling into a vortex of self pity & self aggrandisement, a dangerous combination which meant I did pretty much nothing creatively for way longer than I care to think about. I also did other things like getting married & buying a house but I didn’t really make anything for a really long time. I only really started doodling again for Inktober 2019 & then the pandemic gave me a bit more free time last year to really start to work at it again. It didn’t really become properly consistent until this year.

Sorry that was very un-brief. This is all going to be quite, un-brief.

Pretty much everything, but it's a mystery too. If I see something & want to do something like it, it won't work, unless I just try to outright copy it, which I won’t let myself do, though I hear it can be useful for learning.

If I’m really struggling then the best thing is to switch off & do some kind of repetitive mundane task & then something will often come to me, I can’t always make a doodle I’m happy with from the idea, but that’s how they come, mostly. My favourite thing is when I start a doodle with no idea at all & by the time it's finished there's some kind of feeling there or I can look at it & think "ah, I know what that's about".

I love horror films, the first images I remember being excited about were video covers on the shelves at the video shop (I told you I was old) the films I imagined were almost always much scarier than they ever were when I eventually saw them. Obviously my work looks nothing like that, but that was the first thing I remember that really piqued my interest.

I like the look of old cartoons, Mickey Mouse will always look better in black & white with big black eyes, there’s something slightly odd about it. I like the mixture of the cute & the peculiar. That’s why Twin Peaks is my favourite TV series ever & why I like it when I’m shuffling music and Taylor Swift is followed by Aphex Twin, I like jarring transitions. Contrast is my favourite thing I suppose.

What is your favourite thing to draw?

Anything figurative, hands, eyes, feet, mouths, beans. These are the things that are most expressive so these are what I keep coming back to. The best compliment is when someone says they can empathise with a simple character and that’s usually down to one of these things. It's happened a couple of times & usually with the simplest doodles. I try to remind myself of that when I’m obsessing over some little detail or other.

Almost all my doodles are just beans with appendages, I learnt that from Proko on YouTube.

What art goals do you have for this year?

Too many to mention. I want to make more time for improving, more figure drawing, working in colour, working on 3D, some animation, I want to get my shop set up & hopefully sell something!

My main focus right now is continuing the world of Pickle, the character I’ve spent the most time on & the one I’m most invested in. I'd love to do more with him in 3D but still keep the same kind of look, that's a challenge. I'm also thinking about making actual figures, I really love what @wood.youmind does & I'd love to do something like that with my characters, but without feeling like a rubbish imitation. Instagram as a sole outlet isn’t good for all these different avenues because I’m a slave to my uniform grid, so I’d like to break free of that, get my website done.

A more intangible goal I have is to stop worrying about what I’m doing & just do it. These might be life goals rather than goals for this year

How many months are left?

What techniques/supplies do you use?

I mostly use my iPad and Procreate to create ink-like doodles with a fair bit of stippling, I don’t like to use filters or any particularly special brushes much, I mostly want anything I do on Procreate to be recreatable with paper & ink, which I sometimes use too. With my current style the iPad is really just a tool to save on paper, ink & mess rather than affecting how anything looks. Also at this point I’m addicted to the undo function, which means I’m probably more confident with my mark making on a screen than on paper, double tapping on paper doesn’t undo anything, I keep trying it by mistake.

I also enjoy messing with Nomad Sculpt for 3D sculpting on the iPad too. It's a really useful tool for both final images & for setting up lighting & scenes which might be tricky for me from imagination.

What advice would you give to another doodler/artist?

I would say just do work & don't think too much about it. If I start thinking or looking at other people's work before I get started then I can get stuck in a really grotesque loop & I'll achieve nothing. I find it's best for me not to look at too much other art when I'm trying to work, at least not early on in a doodle, because I'll just become too self critical. Things work out best for me when I just get started without really thinking about it, if I have a specific technical problem I'm trying to solve or I’m doing a study then I'll look at reference, but really I find it's best not to think.

Most folks probably have a lot more potential than they manage to achieve because of unhelpful thinking. When I switch off and just get lost in a doodle everything is good, but the pressure of needing to get something done or to be good enough or to not repeat myself is horrible. So, try not to feel like that. Try to do what you enjoy & hopefully some others will enjoy it too.

It may not be the most practical or easy to achieve advice, but it’s what I try to tell myself so it’s all I can offer. That and don’t stop doodling for a decade or more, but if you do, you can always come back to it.

Where can people go to learn more about you or see more of your work?

At the moment it’s really just my instagram @thedepsdoodles, I’m starting to use twitter, also @TheDepsDoodles, I do have a website (predictably) www.thedepsdoodles.com, but there’s nothing there yet. 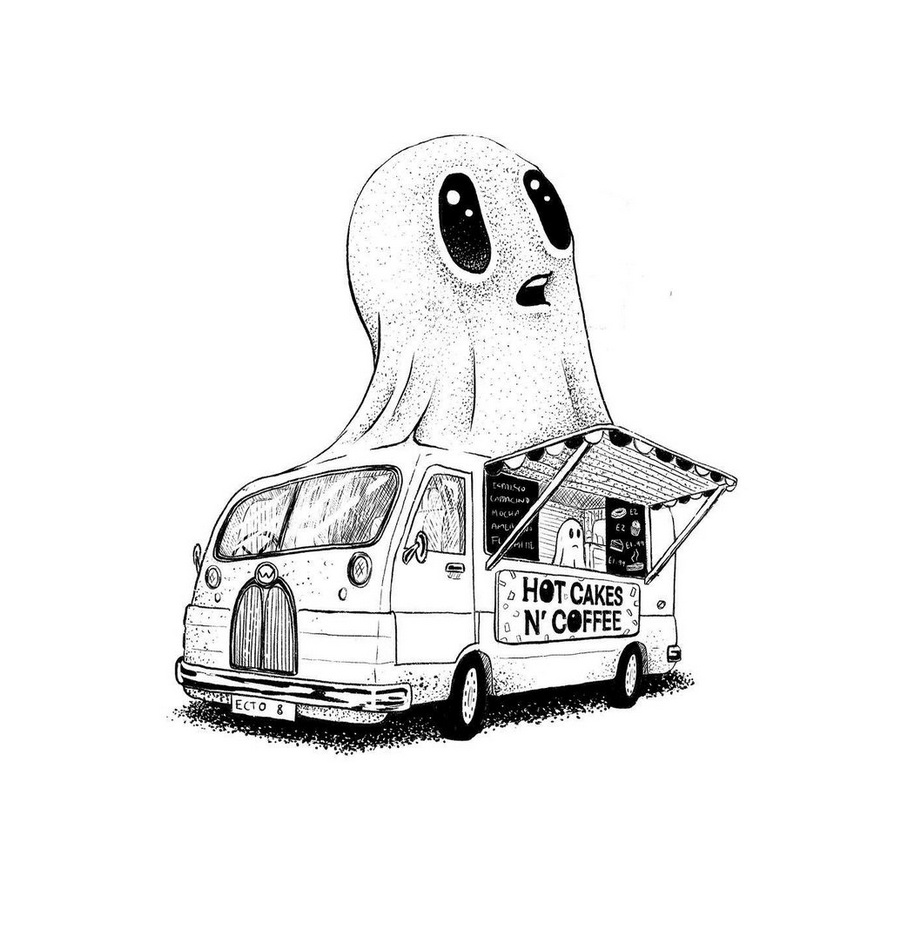 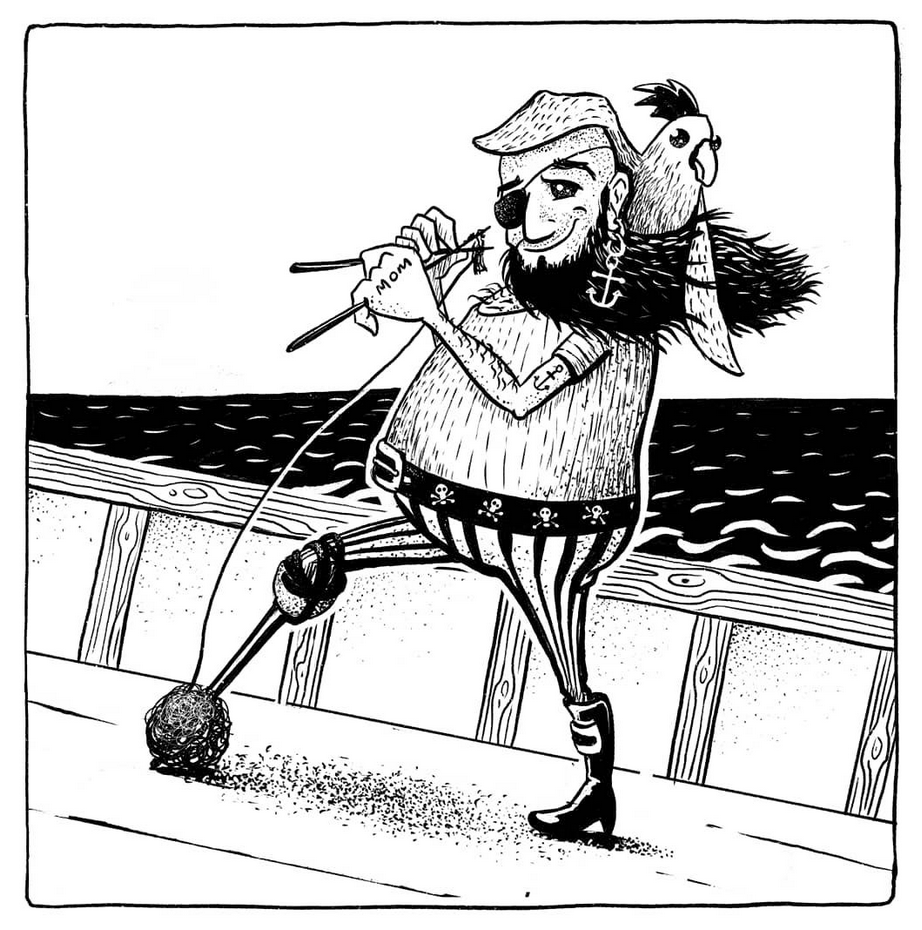 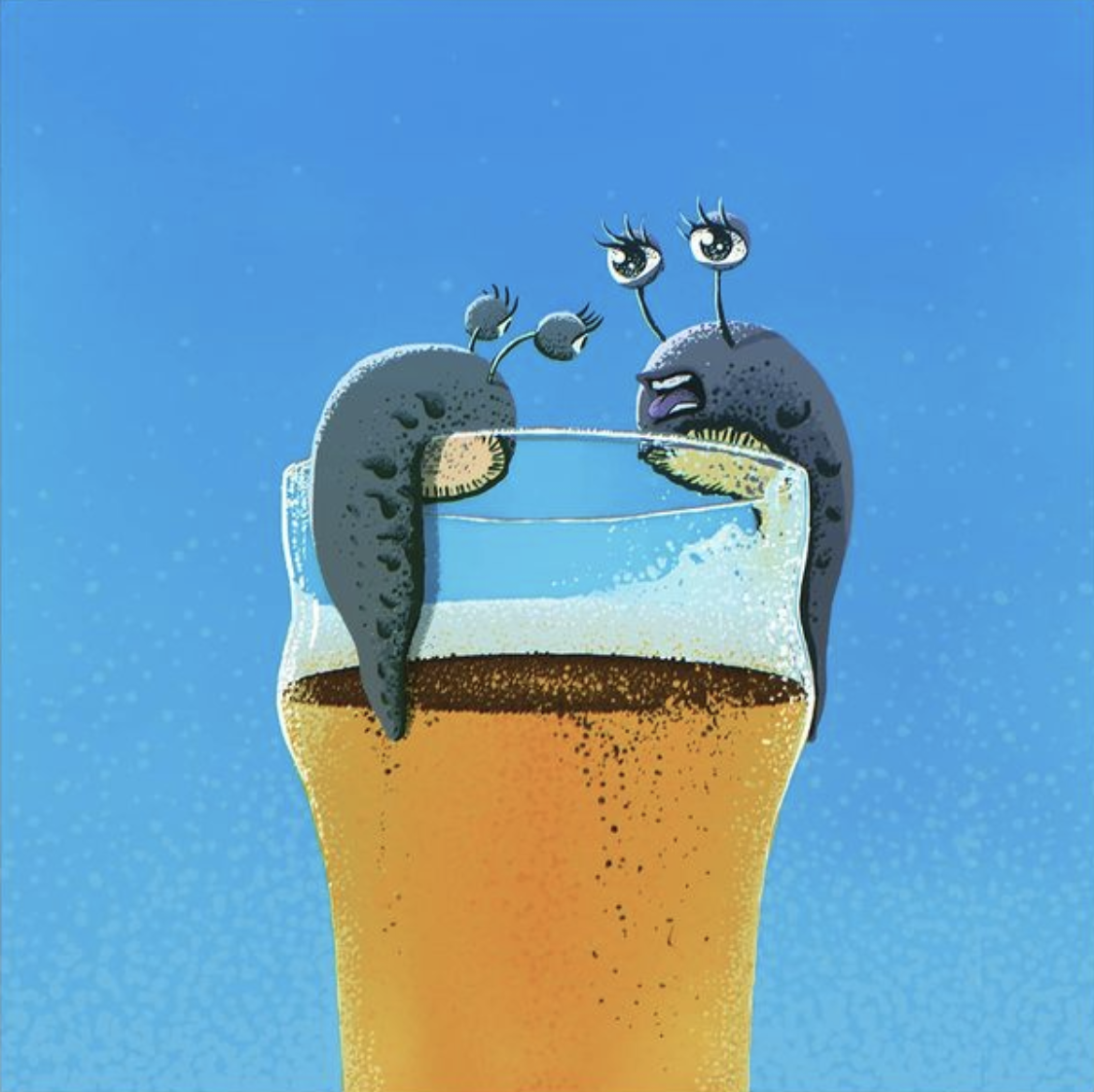 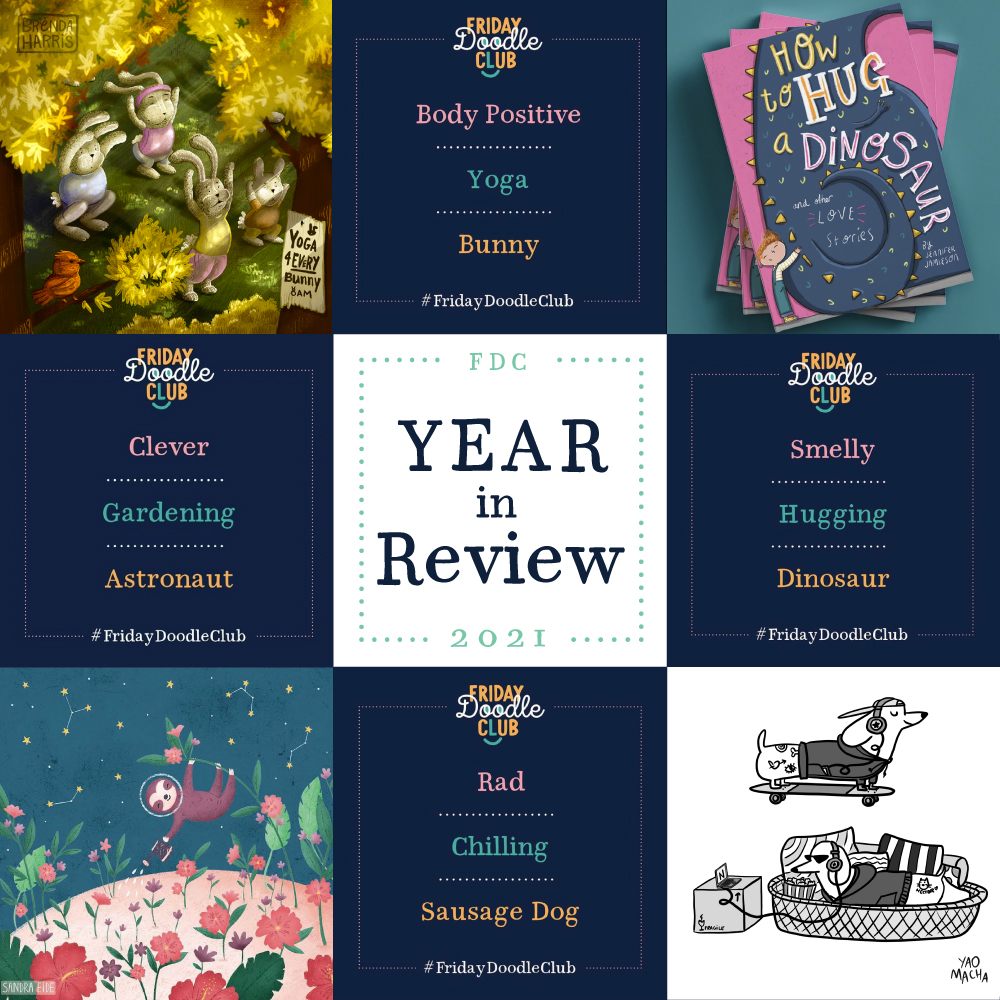 FDC Year in Review - 2021
In the beginning of 2021, four creative minds ( @Jen_Jemieson, @SandraLynnEide, @creativebrenda, and @yaomacha ) wanted to boost their sketchbooks and character design skills. We Read more 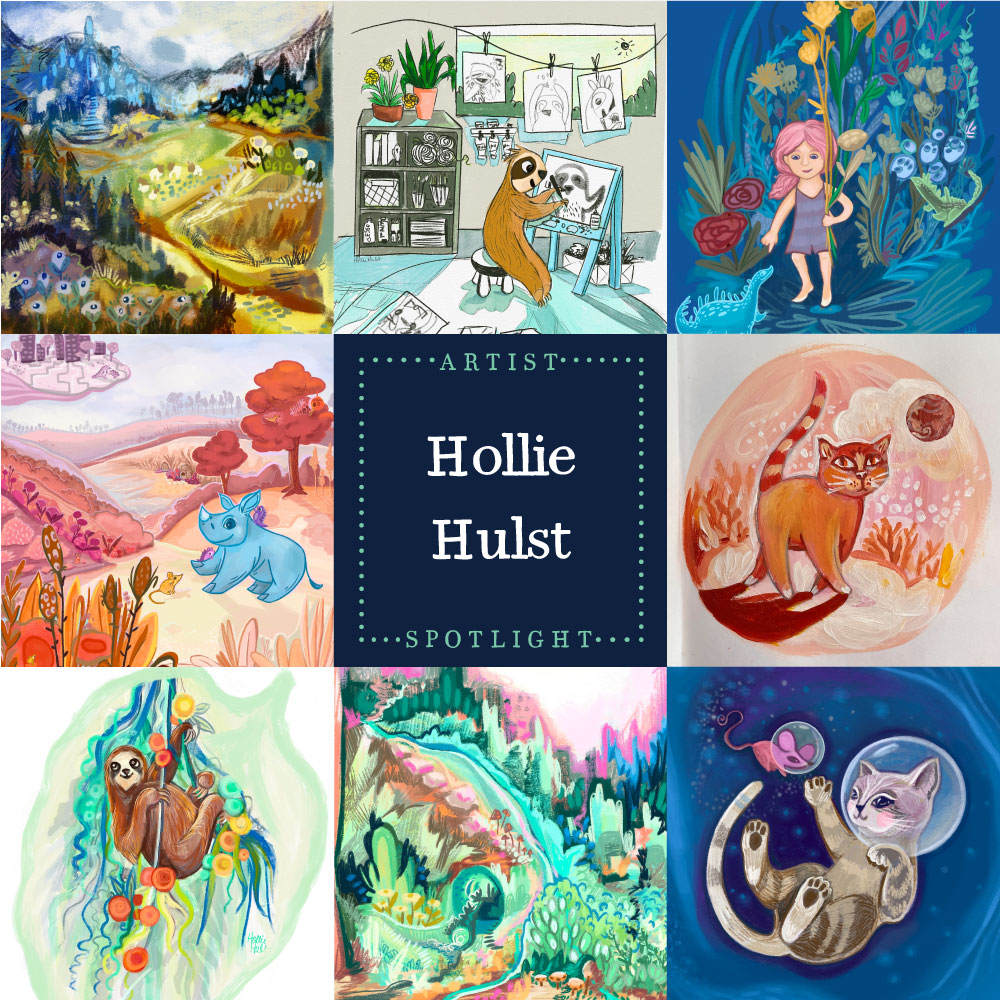 Artist Spotlight - Hollie Hulst
Hello! I am an artist who loves creating abstract landscapes as well as illustrated paintings. I studied Illustration and Art Education in College. The last Read more 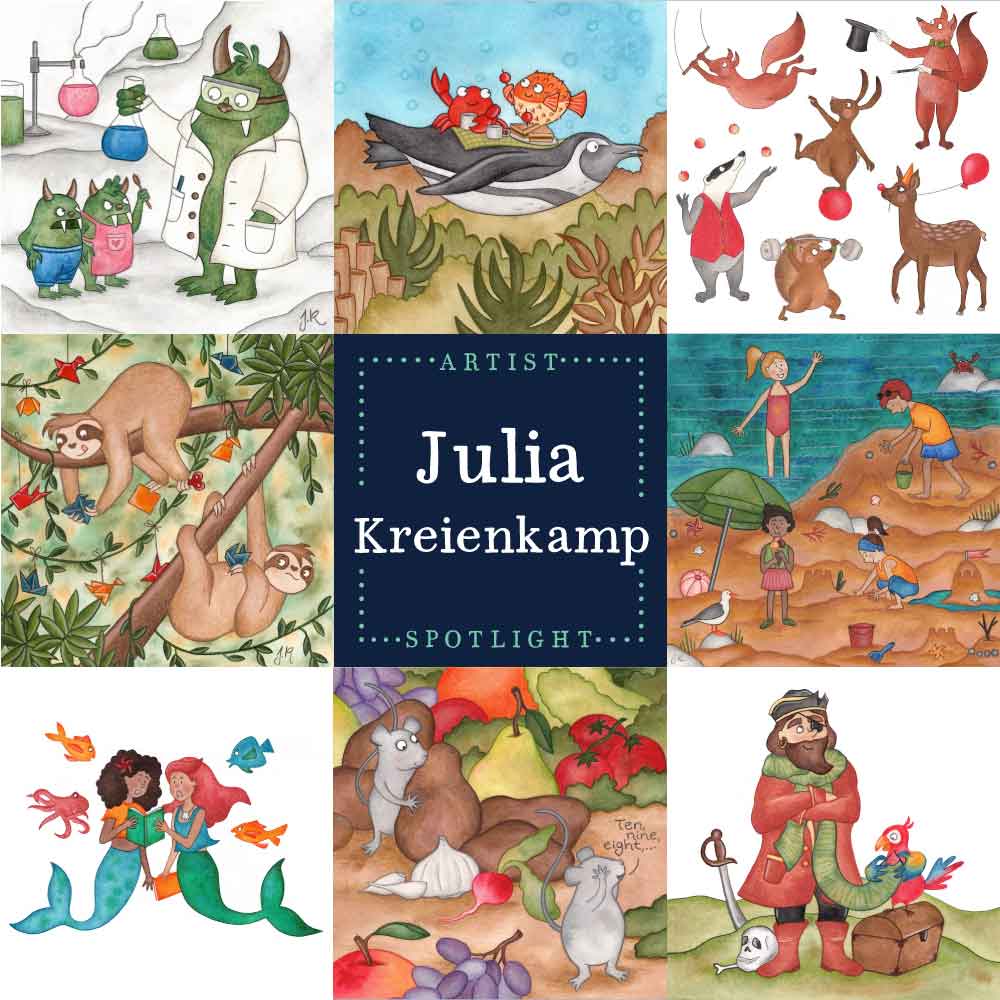 Artist Spotlight: Julia Kreienkamp
Hi, my name is Julia. I’m originally from Germany but I’ve lived in the UK for over six years. I’m a researcher at a university Read more 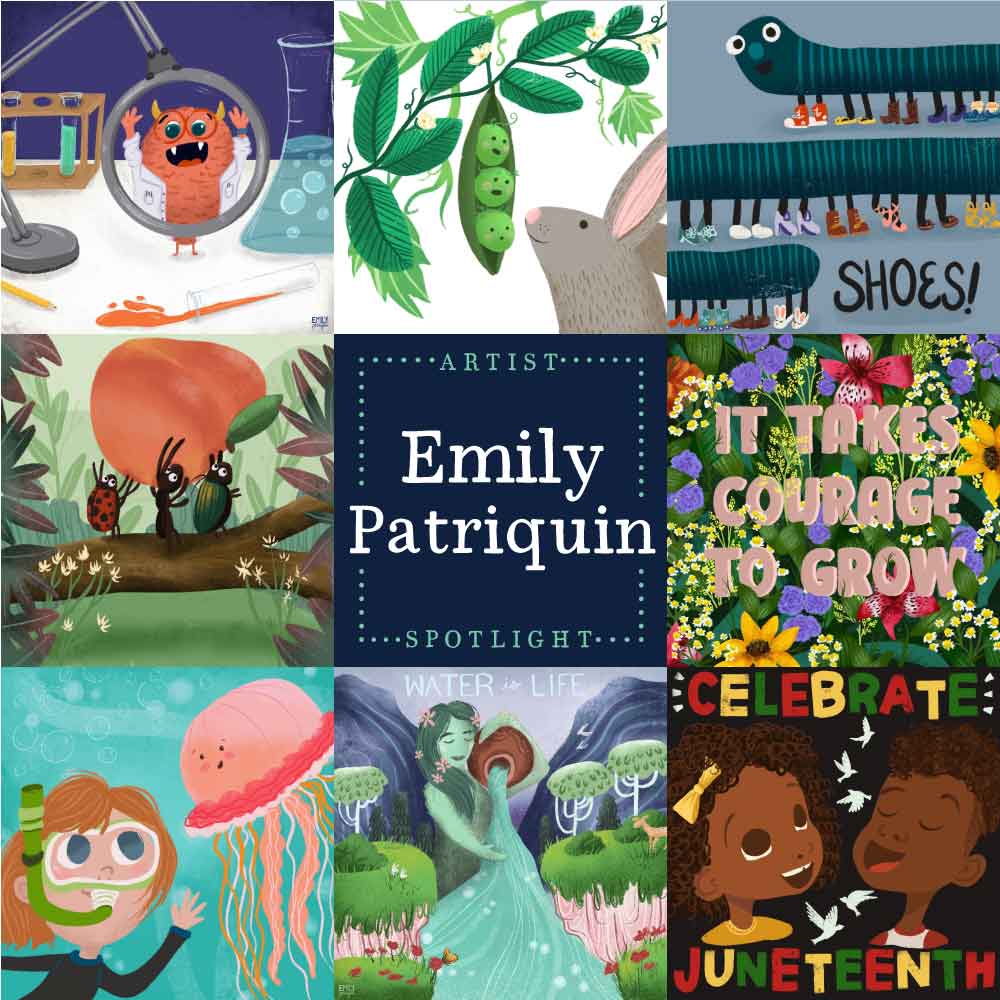 Artist Spotlight: Emily Patriquin
Hello! My name is Emily and I live in the PNW in Vancouver, WA which is just north of Portland. I’m a wife and a Read more 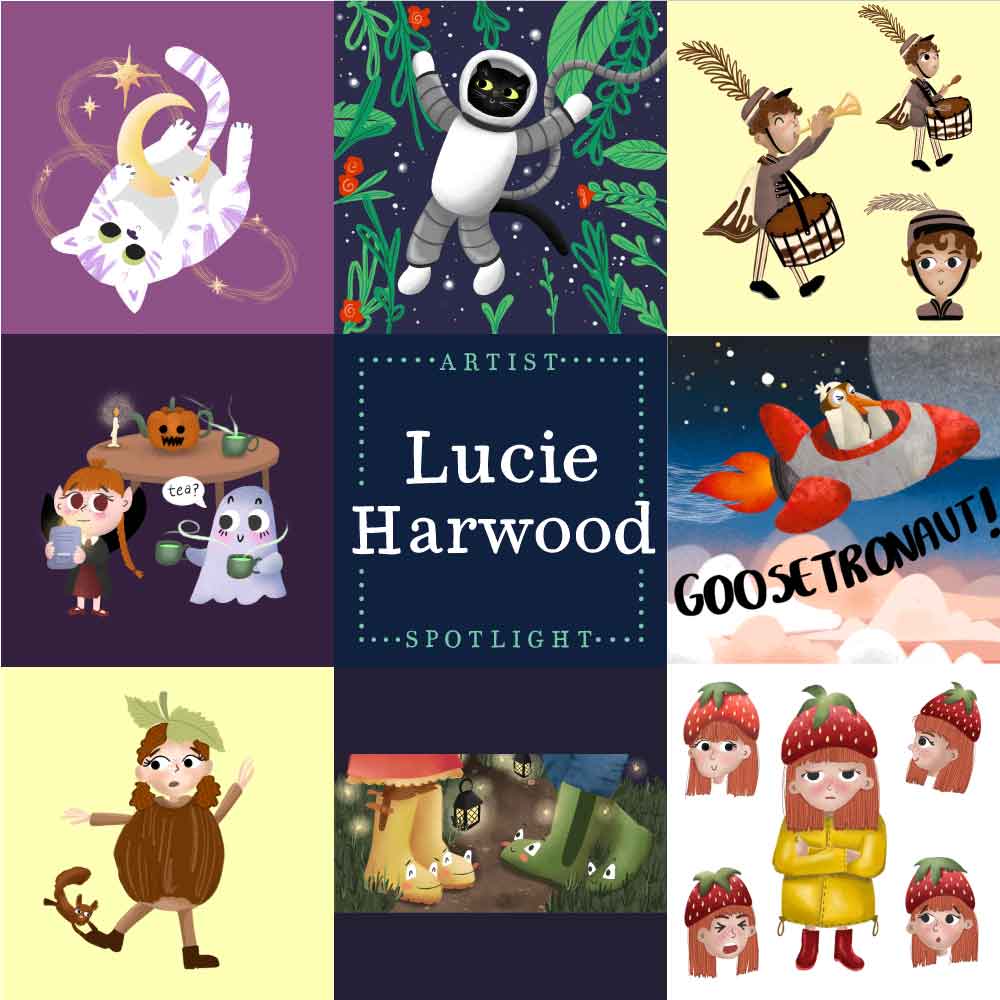 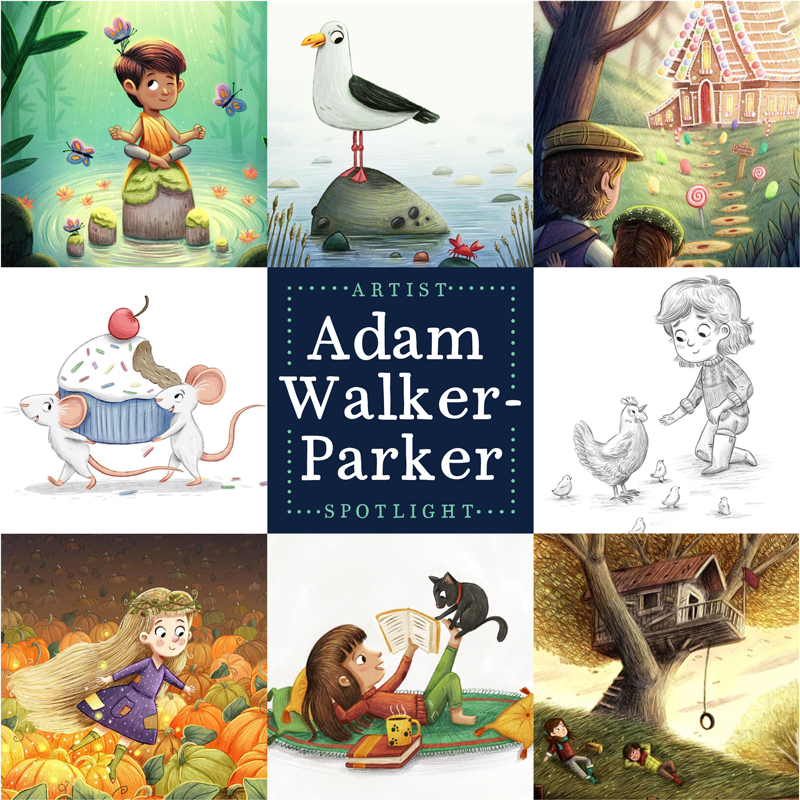 Artist Spotlight: Adam Walker-Parker
I’m a children's book illustrator from the North of Scotland. I was born in 1985 in West Yorkshire. I moved to Scotland in 2006 where Read more 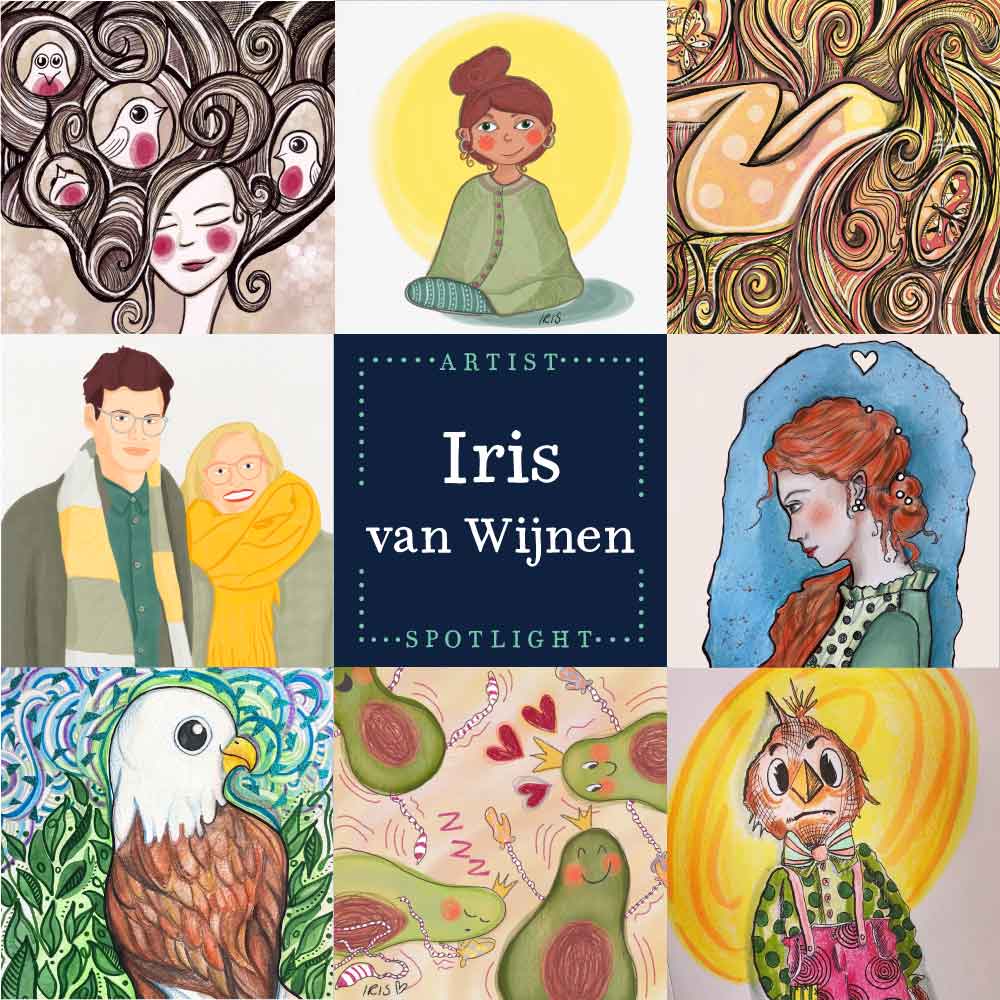 Artist Spotlight: Iris van Wijnen
My name is Iris van Wijnen, a Dutchie currently living in Bayern, Germany. I work as an international opera singer, am a yoga teacher as Read more 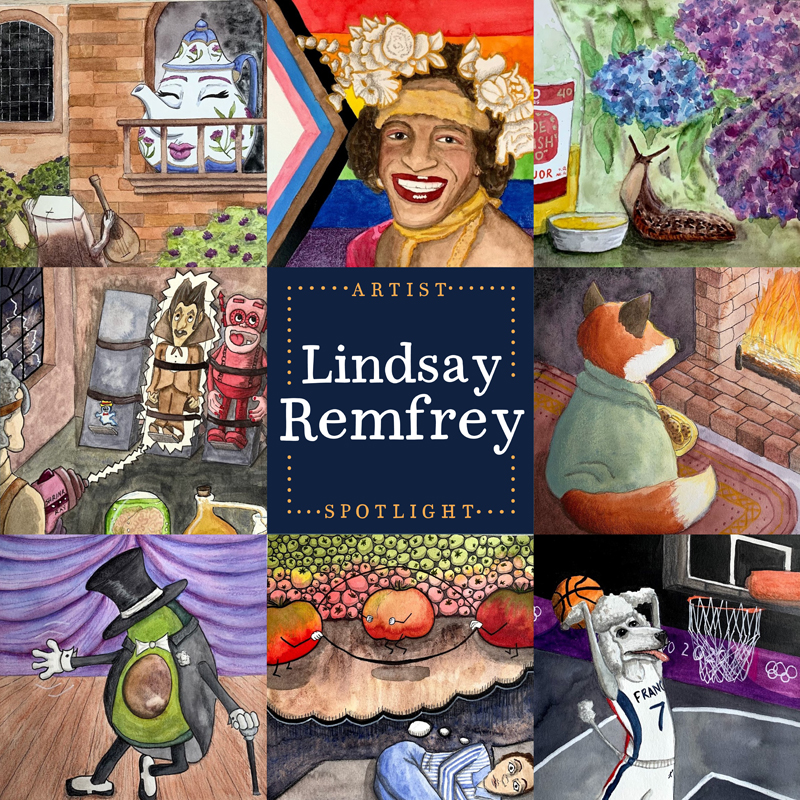 Artist Spotlight: Lindsay Remfrey
My name is Lindsay and I live in Washington State, USA with my husband and daughterand our furry feline overlords. I was an artsy kid Read more 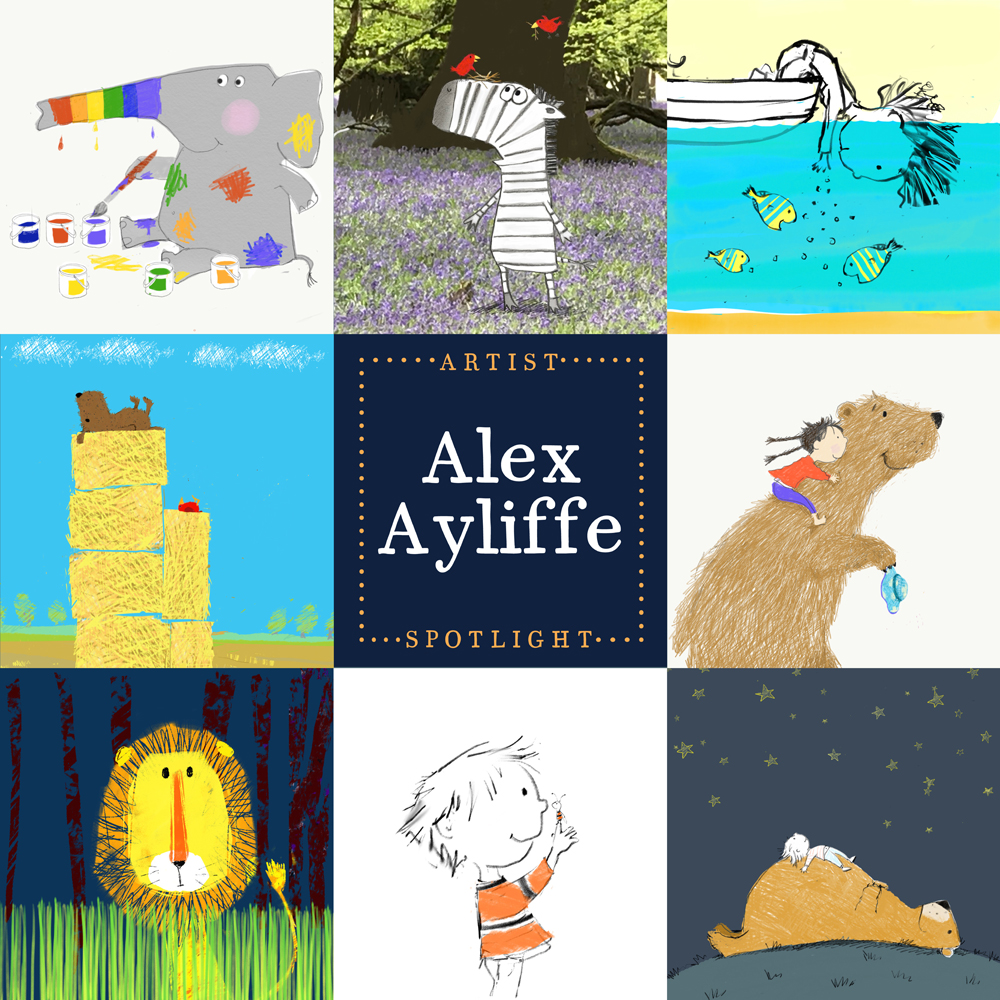 Artist Spotlight: Alex Ayliffe
Hi my name is Alex, I am originally from Hertfordshire but have very recently moved to sunny Suffolk with my husband, youngest son and a Read more 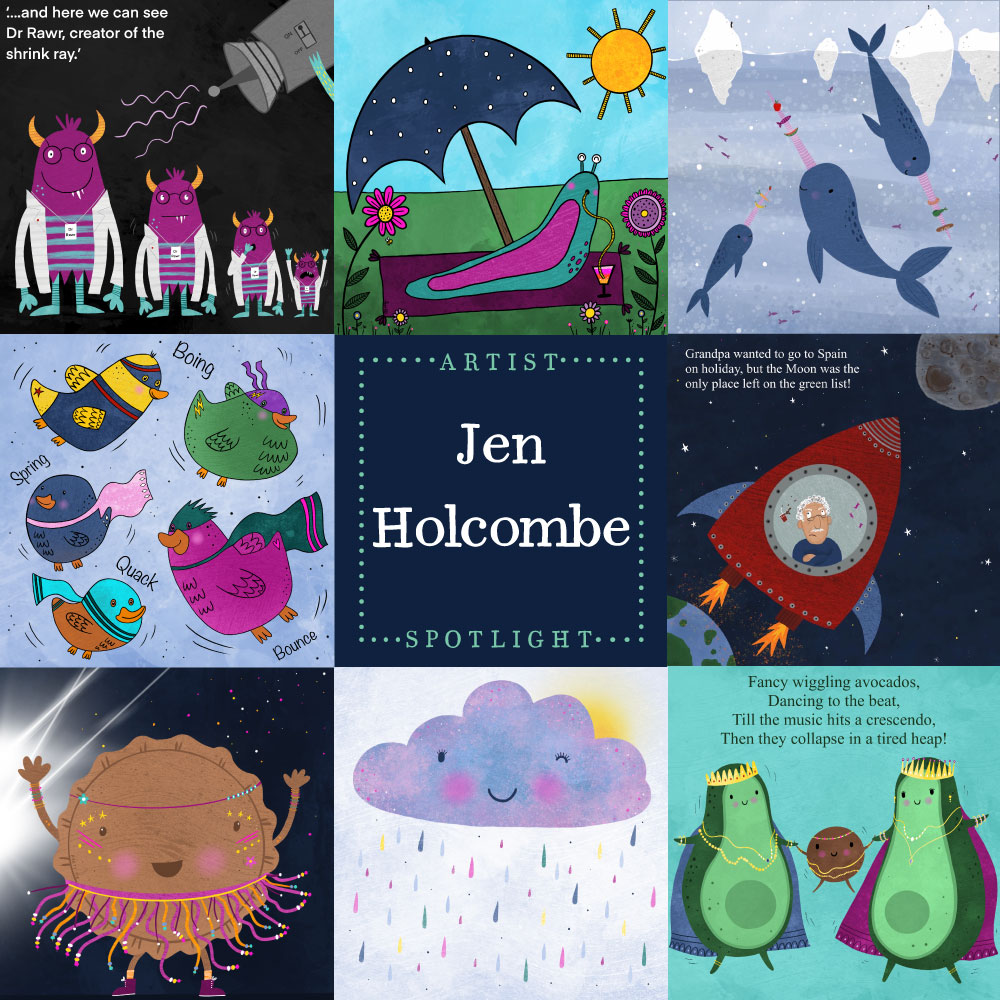